Touch Tag Theatre on the Radio

Well, the Applied Theatre students broke new ground earlier this week with two performances of touch tag theatre on the St. Mary's radio station. The biggest gratification was that the technology worked and the interactions were a success. I was so pleased [and not just a little proud] of the students' hard work, focus & dedication to, once again, inventing the wheel in that this is a programme that had never before been attempted at this Uni.

I must say, however, that I was disappointed with the interventions from the audience. One thing that I had not figured on was the fact that the audiences might not take the subject matter as seriously as we had taken it as a class [we presented two pieces on gender equality]. There is something to be said about the familarity of the audiences with the cast & crew [most who had turned out were drama students], so there was already established relationships. Add to that the 'thrill' of being live on air and you get a situation where a lack of seriousness can take over.

Having said that, upon a debrief by the Applied Theatre students, they spoke of very frank and interesting discussions that the pieces of theatre brought up in each of the classrooms [those discussions, unfortunately, did not tranfer onto the interventions on the radio]. And, once the pieces had finished, the cast & crew met up with the audiences in the SU bar and held a two hour forum on the pieces all the while casting an eye around the bar to see similarities between the performance they just heard & the goings on of young men & women in a bar.

I have asked each of the students to write up their thoughts on the evening and how it might be improved upon for next year. It was certainly successful to warrent another attempt. 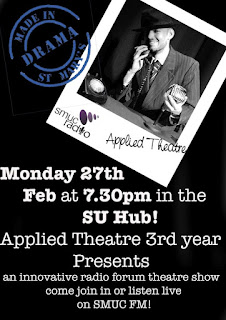 I hope that this might spark more interest in the Applied Theatre students work on the radio station. I think that a community station could be an ideal platform for these students. I look forward to other such programmes in the future.
Posted by Matthew Hahn at 05:19 No comments: 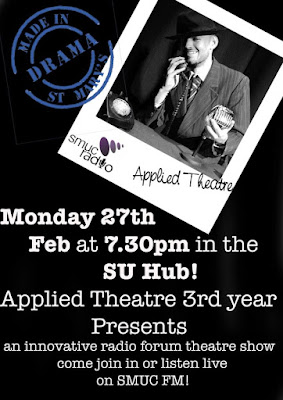 Posted by Matthew Hahn at 05:19 No comments: