Matthew Hahn, a Senior Drama lecturer at St Mary’s University College, Twickenham recently facilitated a theatrical performance at the Houses of Parliament which focused on the effects of the welfare reforms and austerity measures on the rights of disabled people.

Hahn worked on the presentation with a group of actors from the activist organisation, Disabled People Against Cuts, as part of an event called Dignity and Equal Opportunity: Securing the Human Rights of Disabled People in an Age of Austerity.

The aim of the performance was to highlight the true stories of those affected by government cut backs, using a technique known as the ‘Theatre of the Oppressed’.

Hahn, who brought along St Mary’s students interested in disability and theatre, said, “The performance was a success. There were a number of MPs in the audience as well as a great representation of disability activist groups. It was well received by both groups and seen as a new and exciting way of presenting people’s stories.” 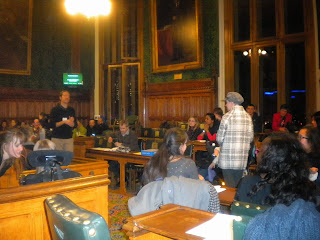 Posted by Matthew Hahn at 02:57 No comments: