After a tiresome but luxurious flight with Emirates, we stepped off the Airbus A380 to be greeted by the abundant natural beauty that is South Africa. As soon as we’d set foot on South African soil it became piercingly apparent we were a long way from home. Shortly after landing we bundled into our coach. Our driver, Christo, slid a CD into the coaches’ stereo, blasting out a song which would later be recognised as the official Applied Theatre SA anthem. The popularity of DJ Lagg in SA became obvious after the first 15 locals we encountered played the song at levels high enough to burst an eardrum.

Later that evening with our stomach’s grumbling so loudly they threatened to contend with the sound of the coaches’ wheels on the gravel road, we arrived at Sea Fever Lodge in Umkomaas. Fortunately after we were given a quick tour of our rooms (all three were kitted out with en-suite bathrooms and on the whole thoroughly surpassed our expectations) we were greeted by the pleasant smell of Sea Fever’s welcoming BBQ. The food was delicious, and the plates were clean within a matter of minutes. Another first was established at the table as we were graced with our first taste of Chakalaka. The spicy sauce would become a prolific and frequently used addition to the week’s meals to come. After a sizeable amount of chicken and a short meeting with the facilitators we would spend the next few days working with, we retired to bed. 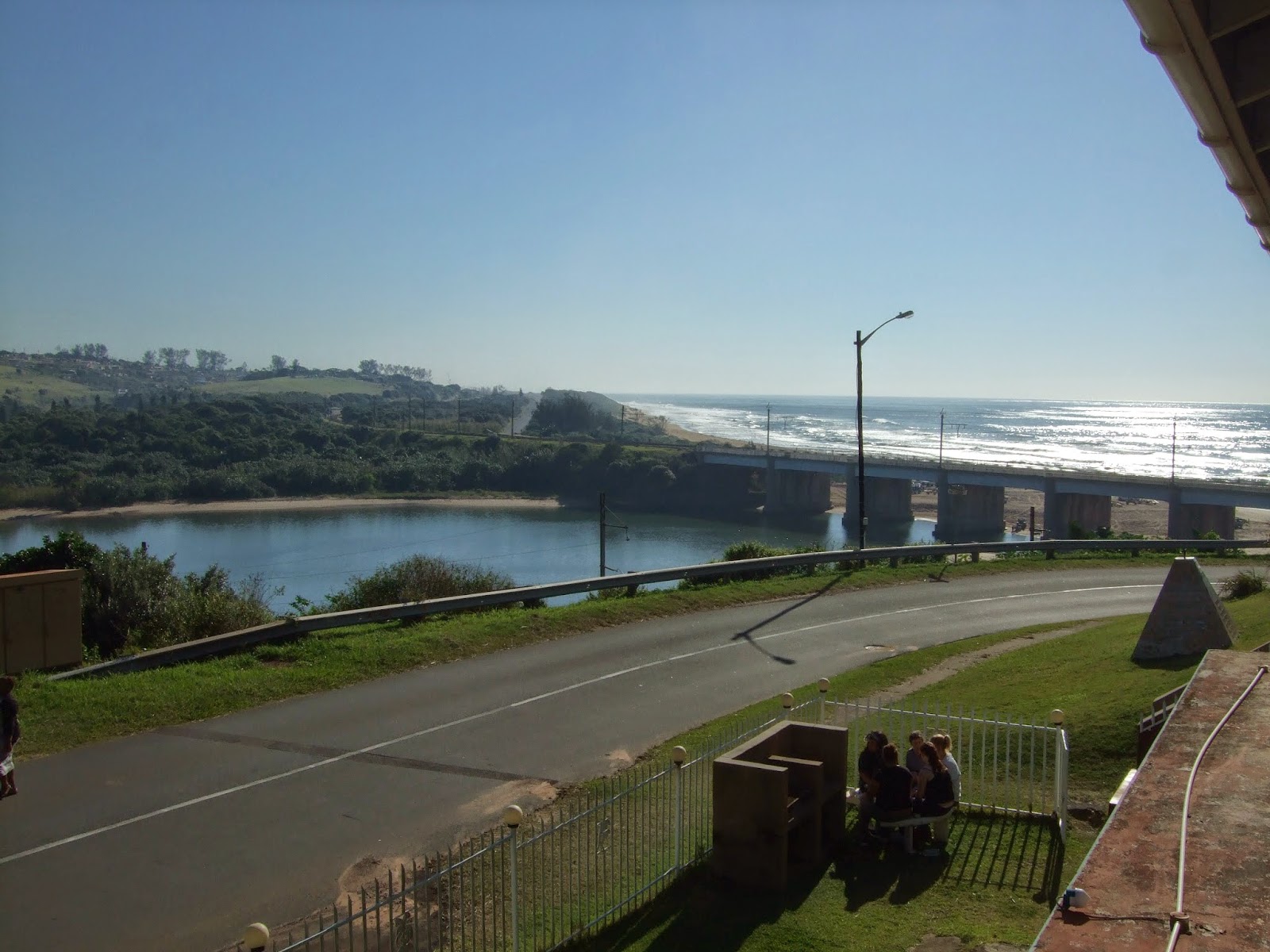 The following morning we woke to the blazing sunshine, the glistening sea, and the beautiful rolling hills, little of which we were actually aware existed until that morning as they were cloaked by darkness on the night of our arrival. Christo arrived once more to drop us to the first destination of our trip. We pulled up to the community hall of Magabheni and were met by a sea of smiles. We introduced ourselves to the students and played a few games in the community hall’s car park. As the day pressed on, the numbers of students swelled and the heat rose, so we decided it best to move the games inside to the air conditioned space. Not long after we had retreated inside, we were reintroduced to Gcina Mhlophe one of the aforementioned facilitators present in the meeting held the night before. 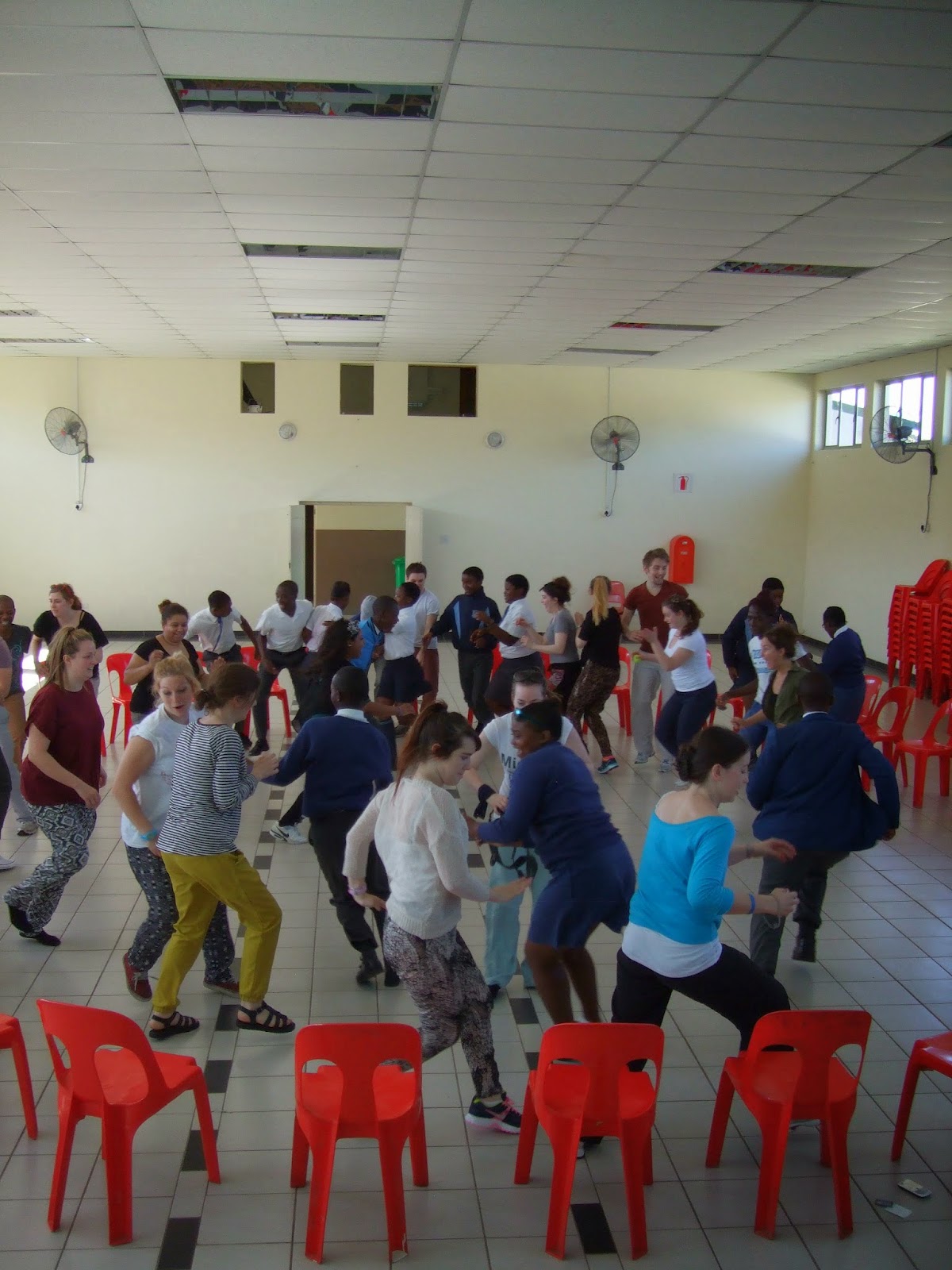 Gcina was bursting with enthusiasm telling stories with such intensity we hardly knew where to look. She spoke of the pride we should have for our roots and where we come from. She went on to point out how South African tradition suggested that by speaking aloud the names of your ancestors, you could breathe life into their legacy once more. Ultimately Gcina was not only a story teller, but also a performer, and she made sure as a facilitator, the people she worked with would behave as performers too. If anybody participating in the day was not loud enough in their acting, or in addressing others she would repeat the words “Speak to be heard, speak to be understood” until the person in question would up their efforts. She told us all a story of an old man with a son and daughter. The son was the CEO of a large factory making paper, but heavily polluting the atmosphere (the factory in the story reflected an actual paper making factory situated nearby, the pollution of which caused the community numerous problems). The daughter worked as the curator of a museum. Meanwhile the grandfather was left to look after the grandchildren. Gcina passed the story over to us and allowed us to develop a performance that continued the story in either the future, the past or the present, with the freedom to construct any fantasy around these guidelines that we saw fit. So many great stories were produced, my telling would not do them justice, but fortunately some of those performances were filmed, see below.


To round off the day, we were shown around the township by the school kids, turned friends, from the community centre workshops. The township was modest, with houses and equipment built from whatever resources could be found, often corrugated iron was used to roof houses, instead of the tiling we see typically in England. I remember vividly seeing the chasse of a pick-up truck, re-invented as a plough. The ingenuity of the place astonished me, and highlighted just how wasteful we can be in some instances back home. After numerous interruptions from cow’s abruptly blocking our path, we head back to the coach, to relax in the last of the midday sun and reflect on all that we had seen and experienced that day. 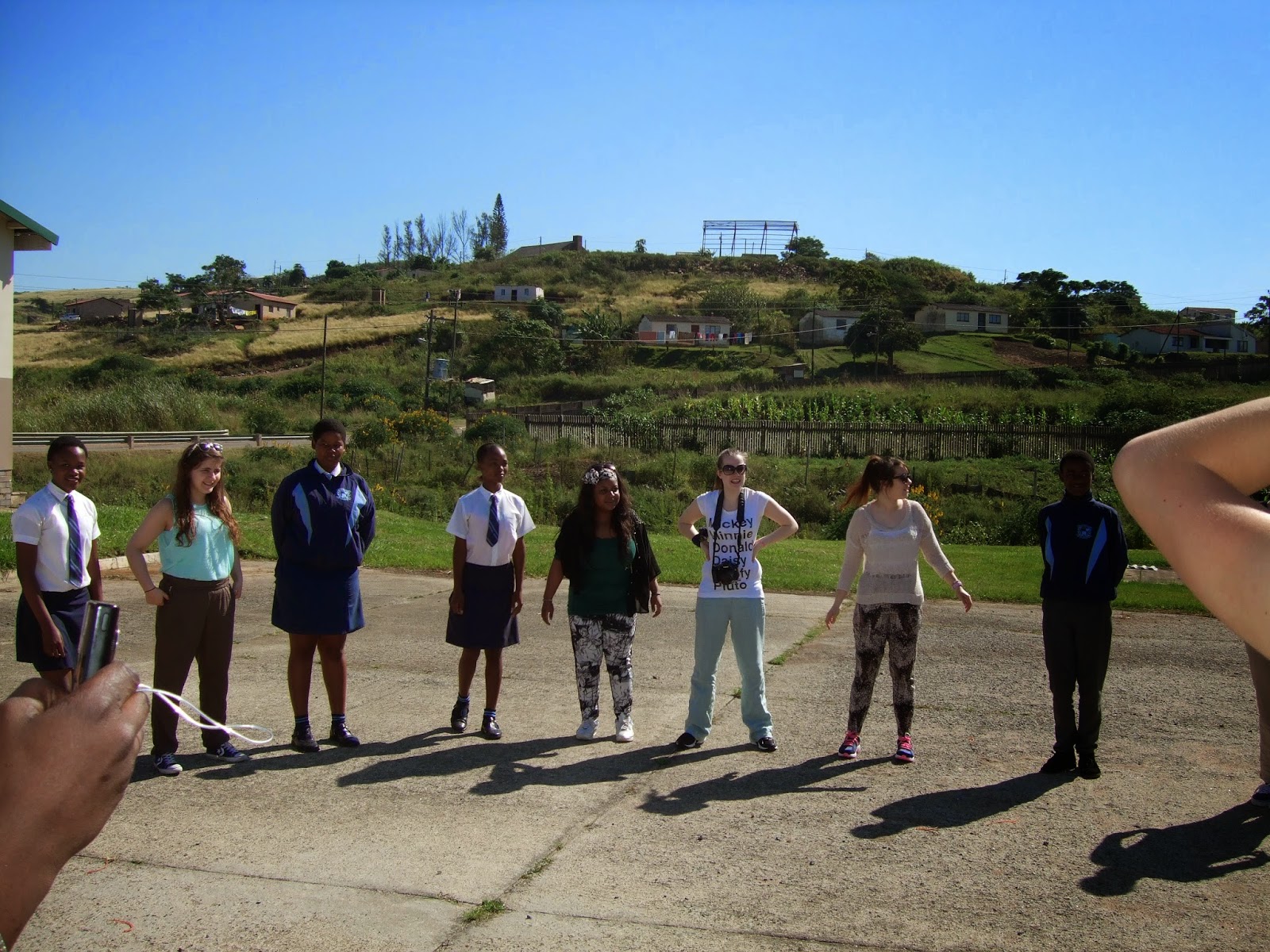 On the second day we were left to decide the course of the entire day. We decided after playing a few games of our own to hand over to the kids and see what games they would usually play. We were introduced to the game ‘Jingles’ something we were told was played extensively with the students who had visited the year before. The game was centred on getting to know the players name’s, this was done through rhythm, song, and dance, and helped us really cement the names of the students we were working with, despite the challenges and difficulties present in a dialect so very different from our own. We spent the rest of the day teaching a couple of Gcina Mhlophe’s stories from her incredible book Our Story Magic. Teaching through workshops we had devised prior to travelling to South Africa, and at the end of the day performed them to one and other. The recurrent theme of the day was dancing, we did a lot of it, teaching dances to one and other, and playing a lot of games through rhythm. One of the boy’s there said something that really shifted my thinking. I commented on how badly I danced, as to which he replied “You dance how you move” a sentiment that in retrospect I couldn’t agree more with. If somebody is having fun dancing, there ability is irrelevant, this lack of judgement in the room held true in our performing, and made me appreciate how much sweeter things can be when seemingly trivial worries like this are put to one side. We finished by performing the stories to one and other through various songs and dances, and the day was a big hit all round.  The day came to a close, we said our final emotional goodbye’s to our now good friends from Magabheni and prepared for one more trip to Sea Fever Lodge, before we would be embarking on a journey further in-land to Harding.

I hope you have enjoyed reading this blog!

Posted by Matthew Hahn at 03:31 No comments: