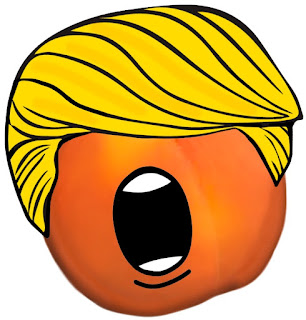 On Thursday 13 February 2020, at the Gulbenkian Theatre in Canterbury, imPEACHable, my latest tribunal play based on the private and public transcripts of the ongoing impeachment trial of the President of the United States, will be performed as part of the South by Southeast Festival.

The play examines the central tenet of the trials, that is, whether there was a 'Quid Pro Quo' offer in a telephone conversation with the US President and the Ukrainian President in July 2019.  Donald Trump insists he did nothing wrong and that his conversations with the Ukrainian President were ‘perfect.’  But the play hears from the others in his administration about how perfect the phone call might have been.

In an age of fake news, witch hunts, spin and short news cycles, tribunal theatre is a tremendous platform on which to examine and illuminate the context and causes of trust and leadership and the potential of both to breakdown.The play is edited from congressional testimony from October & November 2019. imPEACHable is ripped from the headlines theatre.

The play opens with a recording of the 'perfect' phone call between the United States President Donald Trump & the Ukrainian President Zelensky followed by the edited  testimony of several witnesses: Ambassador Sondland, Marie Yovanovitch and others from October & November 2019.  The transcripts were released in early November of over 900 pages which have been edited to 30 pages.  As the play progresses, upstage the hearings are being broadcast in real time to add to the metatheatrical nature of the trial itself [Donald Trump live tweeting during the trial and the Chairman of the committee commenting on said tweets to the witness].

Now that Donald Trump has become the third president to be impeached and the trial in the Senate begins, the script can be regularly updated to give audiences access to a trial with international ramifications.

In December 2019, I had the wonderful opportunity to work once again with community champions in Mukuru, Nairobi. 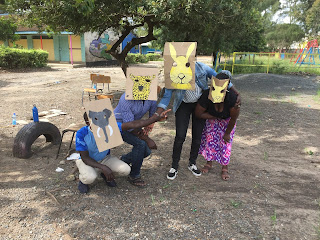 Having created forum & legislative theatre with them in the past, this time our task was to create a celebratory theatre piece based on Kenyan Folktales.
The drama contribution to the inception & sensitisation workshop held in Nairobi had two aims:
1)      To  create new Kenyan folktales that addresses air pollution as well as eliminates false tropes that are often within folktales about 'why things are' [eg why one ethnic group is subservient to another; why women are subservient to men; children to parents; etc...]
2)      To train Kenyan drama facilitators to scale up the drama output as appropriate for Tupume.
These new folktales utilize metaphor as the focus is on school children and their lived experiences around air pollution: what is currently being done and what could be done to improve the situation and to challenge the status quo rather than support the status quo.
Folketales were used because:
a) They are familiar to the audience and it is easy to emphasise intended parallel lessons
b) They are short, making it possible to pass on the message in a short period of time
c) They are precise and effective, making it possible to identify the specific message intended
d) They use characters with qualities which are diverse, but which can be quickly identified
e) Though animal characters, and even human ones, are used, the intention is to give a specific frame of reference that the audience can easily draw from and make specific connections with their own lives and convictions through metaphor
f) They challenge the audience to think more deeply and draw their own conclusions and even initiate lines of action
g) The children will engage more thoroughly with  folktales than the more verbal & cerebral forum theatre / ‘docu-drama’.
There were three steps in the folktale development:
a)       Read the old folktales and unpack the themes, characters & situations presented
b)      Discuss with the children their experiences of air pollution where they live, go to school, etc
c)       Based on the group’s experience of air pollution as well and the old folktales, create a new folktale 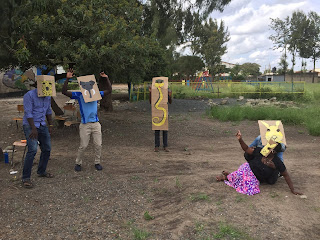 On the Monday following the Saturday workshop, I worked with each of the Kenyan drama facilitators in order for them to be able in the future to scale up the drama project in a selected school or community centre.
o   We reflected on the Saturday process and what worked well and what could be improved
o   We discussed Story Structure:
§  Set Up & Inciting Incident - establish the main characters, their relationships and the world they live in. Later, a dynamic incident occurs[catalyst], that confronts the main character (the protagonist), and whose attempts to deal with this incident
§  Confrontation - depicts the protagonist's attempt to resolve the problem initiated by the first turning point, only to find themselves in ever worsening situations. Part of the reason protagonists seem unable to resolve their problems is because they do not yet have the skills to deal with the forces of antagonism that confront them. They must not only learn new skills but arrive at a higher sense of awareness of who they are and what they are capable of, in order to deal with their predicament, which in turn changes who they are.
§  Resolution - The climax is the scene or sequence in which the main tensions of the story are brought to their most intense point and the dramatic question answered, leaving the protagonist and other characters with a new sense of who they really are. 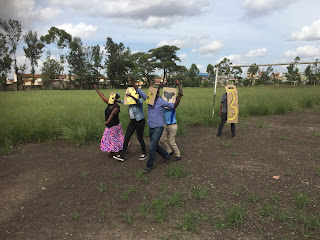 It is hoped that the Kenyan drama facilitators now take their new training into local schools or community centres and create a much more in depth and longer drama piece based on the children’s lived experiences of air pollution and the characters from Kenyan folktales. 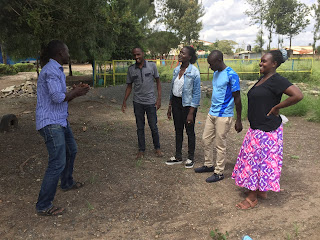